Seduced by a whisper: the crooners | Concertzender.nl :: Radio

Seduced by a whisper: the crooners

If you want to be heard you have to raise your voice. And if you have a loud voice you can command troops on the battlefield without a megaphone. But seducers go gently, speaking softly, which leads to the best way to do that: singing a song.

From 1925: you can do it softly
In 1925 a revolution in popular music took place: de Victor Talking Machine Company introduced the electric microphone. From now on singers making a record no longer had to shout into a huge horn which caused a needle to groove sound waves into a wax disc. Now with the much more subtle microphone singers could concentrate on the interpretation. Another benefit: singers with softer voices could be easily recorded.

Devilish evil
So started a new, relaxed and sensual way of singing, with a new wave of vocalists: the crooners. Love songs became amazingly intimate. So the moralists immediately pursued famous crooners calling them ‘ a devils evil’ and the new singers as degenerate members. The crooners were so successful thanks to technological innovations. Primitive recording equipment required loud voices and exceptional lungs, both in the studio and in the concert hall. To be heard above the orchestra a singer needed strong vocal chords. That sort of loud singing worked perfectly in the America around the start of the 20th century, where the cultural elite liked to focus on old Europe, in particular singers who were inspired by the Italian opera tradition.

Yes, naturally
The early record industry thought that the public wanted opera singers and symphony orchestras. But no: they wanted the wild ‘ragtime’ and vaudeville-artists such as Al Jolson. Above all the primitve technique of carbon microphones couldn’t cope with classically trained voices. They were just too loud. The most suitable were ordinary, natural voices and instrumental pieces. Not too many outbursts, but just giving shapes. Radio required not just a new type of singer with gentler voices, but also new repertoire and singers. 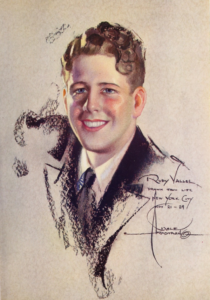 The pros and cons of Jack Smith
Jack Smith was just such a singer, whose presentation was the antithesis of Al Jolson’s. Originally Smith was a baritone, but due to a gas attack during WW1 German attack he became a whisperr. The disaster which had affected him forced Jack Smith to adopt a singing style which coincidentally was just what radio was looking for. To make a living from his singing Smith performed as a ‘song demonstrator’, a sort of live advertisement for the new music publishing company of a certain Irving Berlin. He quickly did that on radio, where his restrained style quickly became beloved of housewives and working girls . Smith knew his trade. It sounded as if he was singing for one person, and everyone thought that they were that one person. When the crooner rage broke loose Smith was already on the way down. His style was too affected and he had become too fat to pass as a ladykiller – definitely required for a crooner.

Victor day
The rise of radio gave singers an opportunity, but also affected record sales. Why would you want a fragile record when you could get free and better sound from radio? So innovate! The research department at Western Electric developed an electric microphone with a range of five and a half octaves, almost twice as wide as previously, which made the recording of higher and deeper tones possible. Record company Victor hesitated, but when competitor Columbia Records dived in Victor followed immediately and declared 2nd November 1925 as ‘Victor Day’. Long queues formed in front of the stores where the new machines were being demonstrated.

Thanks to the electric microphone thin voices could also rise above the musicians, which saved the day for many vocalists, including the crooners and their predecessors. The new wave of singers was romantic – sometimes actually feminine – which contrasted with the outer world of gangsters and macho’s. They sang naturally, without decoration and conversationally with a background of nightclubs, cabarets, diners, where their songs coloured the buzz of eaters and drinkers. Initially the crooners attracted mostly women, as many men didnt like the swooning, sentimental songs and soft groaning and swooping.

Gods gift to the woman
However when tough guy Rudy Vallee appeared even the men couldn’t resist – and he removed the first wave of real crooners in 1928 . Vallee was the first pop idol. He was so popular that in 1929 President Hoover asked him to sing a song to drive away the Great Crash, and journalist Martha Gelhorn described him as ‘God’s gift to us women’.

As America sunk even deeper into the crisis, the confused victims needed even more an intimate voice which would help them through the long dark nights. However there was much criticism, The New York Times writing in November 1932: ‘They’re singing like that can’t help you. Their style is beginning to go out of fashion. Crooners will soon be going the way of tandem bikes, mahjong and midgetgolf.’ 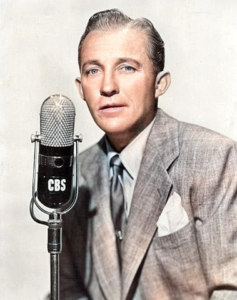 And then there was Bing
It didn’t come true thanks to the sudden appearance of Bing Crosby. After he broke through crooner was no longer a dirty word. Crosby changed the rules of the game. He was the first American popular singer who sang in a relaxed way. His name became synonymous with ‘easy listening’, and he would be a huge influence on many successors: ‘I don’t have the affectations of a trained singer. If I’m successful, it’s because I’ve kept naturalness in my style.’ Only in 1955 did the crooners period come to an end with Bill Haley and ‘Rock around the clock’.