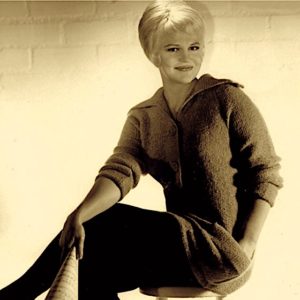 Her voice was labelled with such terms as smoky or breathy, sensual to the highest degree. Jazz author Leonard Feather remarked “If you don’t feel a thrill when Peggy Lee sings, you’re dead, Jack.”
Remarkably she managed to accomplish an enormous amount with, what was in fact, a small voice. She had learned how to turn a weakness into a strength early on. Just by singing even softer she would manage to get the attention of the audience and could give a large concert hall the allure of an intimate nightclub. She has said about the singing trade that it’s secret to the true art form is to leave out all but the essence.
Unlike some singers nowadays Peggy Lee did not need to resort to dressing scantily and sashaying around the stage in order to get attention.

It is striking that Peggy Lee did not just become one of the very greatest in pop-culture, she is the only female singer to have had top ten hits in the 40s, 50s and 60s (with songs such as ‘Fever’ and ‘It’s a Good Day’) but that she also managed to achieve the same feat in jazz music. She was wonderful at performing songs in which the lyrics were the most important element (such as ‘Black Coffee’ or ‘Don’t Smoke in Bed’) and just as easily worked with comical repertoire, for example ‘Mañana’. Despite that small voice she managed to effortlessly hold her own beside the force of a big band (think about Benny Goodman’s band) and could swing infectiously with the combo of pianist George Shearing (just listen to the album ‘The Beauty and the Beat’)

Even more remarkable was the fact that she was often terribly insecure and that it would then take a very long time before she dared to perform a song. She would constantly say: “I don’t own that song yet”, and would repeatedly have to sing a song at home at least a hundred of times before she would sing it in public. That perfectionism stayed with her throughout her career. Every detail, every step, even the exact moment at which she would raise an eyebrow, it was all carefully worked out. Nonetheless, her performances appeared to be spontaneous and relaxed every time. 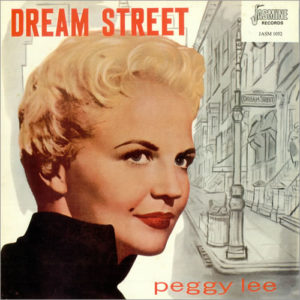 Despite the occasional bouts of insecurity, she could also be very determined. At a certain moment, upon hearing the song ‘Is That All There Is?’ by Jerry Leiber and Mike Stoller, she absolutely wanted to record it. However, record company Capitol did not see the point in it. It was the year 1969 and rock bands with pounding guitars ruled the music charts, so why would anyone be interested in a record that would mostly consist of spoken words and was accompanied by violins to boot?

Eventually she managed to persuade Capitol to let her record the song, however the record company subsequently refused to release it. It was their opinion that the song was too long and would hardly get any airplay on the radio. She had to fight quite a battle to get her way.
There had been plenty of squabbles in the studio as well. Jerry Leiber was present during the recording and time and time again he rejected the result, much to Peggy Lee’s dismay. The main point of contention was the interpretation of the song. The singer wanted to inject some humour into it, in order to slightly abate the bleak character of the song, which seems to incite suicide. Something that the writer just didn’t want.
In the end they wound up recording 36 takes of the song. Towards the end the singer was becoming exhausted and she had started to get hoarse. This is what provided her with the right state of mind and would end up earning her a Grammy Award.
Jerry Leiber only admitted much later that the technician had also erased the best take by mistake. Even so, Peggy Lee wasn’t pleased with the grim rendition because when she performed the song live on stage, she would add funny asides to the lyrics to make the story a bit lighter.

Her life story might well have been that of a blues singer. She was born as Norma Dolores Egstrom in 1920, the seventh of eight children. Her father was Swedish-American and worked at the railway, her mother was Norwegian-American.
When she was four her mother passed away. Her father remarried to someone that turned out to be an evil step mother, one who didn’t think twice about inflicting bodily harm to her step daughter. She would often be beaten or would have boiling water poured over her hands when she was doing the dishes. All her life she would have to use make-up to cover the scar on her cheek, which she had gotten from a thrashing.
And yet, she later claimed that her nasty childhood had had its positive sides as well. It had toughened her up and ensured that she would be able to cope with disappointments later in life. She made fun of her miserable childhood in the song ‘One Beating a Day’.

Singing became her way to escape. First in the church choir; when she was fourteen, she got to sing for a local radio station and it was there that she was given the name Peggy Lee.
When she was seventeen, she was able to leave home. After a failed attempt at finding work in Hollywood she got a contract with a trio at a nightclub in a hotel in Chicago. Around that time bandleader Benny Goodman, whose band singer had just resigned, stayed at this hotel. He showed up during a performance, which turned into an open audition, and so a career at the forefront of vocals began for Peggy Lee. A career which would span decades.

Songwriter Alec Wilder once determined that Peggy Lee had the voice of a busker, one of those performers that you walk past without giving them much thought. But if you were ever to stop and listen, he said, you would never want to continue walking…