A new series about Rembrandt

2019 is the 350th anniversary of the death of Holland’s most-famous artist, Rembrandt van Rijn. A series of three programmes in Documento presents music from the period in which Rembrandt lived and music that is associated with his work in other ways. 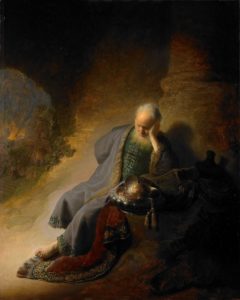 Part 1, on Monday 22 April 19:00-20:00 CET, features music that is inspired by Rembrant’s biblical paintings, such as the painting ‘Jeremiah lamenting the destruction of Jerusalem’ from 1630.
This scene has often been used by composers as the starting point for a composition, examples are the lamentations composed by Emilio de’ Cavalieri and Johann Rosenmüller. These lamentations are often performed during Easter Week.

Part 2 of the series can be heard in Documento on Monday 6 May and part 3 will be broadcast in June.