In 2 episodes of L’Esprit Baroque (on Thursday 13th January and on Thursday 10th February) you can listen to a reconstruction of the ‘Ballet Royal de La Nuit’. The original performance was the debut of Louis XIV as Sun King.

In February 1653 a long and extravagant feast was held in the Louvre in Paris with, as its centrepiece, the dancing of a 15 year old Louis XIV. Cardinaal Mazarin staged this marathon event (it lasted more than 14 hours) that took place in the presence of the French aristocracy, European ambassadors and also citizens of Paris to confiirm the power of the new king. Louis XIV danced thr role of the Sun King during the Ballet Royal de La Nuit, and was subsequently known by this nickname for the rest of his reign. 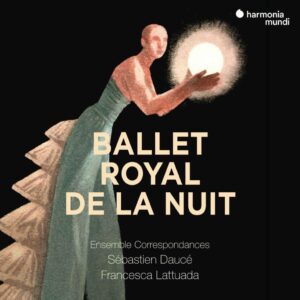 The French Ensemble Correspondances led by Sébastien Daucé released a CD box-set in 2020 (see photo) with a recording of a remake of the Ballet Royal de La Nuit.

This long work is divided into four ‘veilles’ (acts or night watches) and concerns the nocturnal activities of both man and the gods. It culminates in a ‘grand ballet’ during which the sun rises in the form of the Sun King.