Mille Affetti
This concert took place on Sunday 12 May 2019 vond in the St Nicholas Church in Utrecht.
Mille Affetti – a thousand feelings: love and loyalty, but also sadness, anger and desperation set the mood for this programme in which Concerto d’Amsterdam and soloist Luciana Mancini freely express these emotions.
Mezzo-soprano Luciana Mancini (see photo) with her warm and expressive, but sometimes almost raw and heart-rending voice is the ideal performer for this repertoire. You can listen to arias from Veracini’s ‘Adriano in Siria’ and Händel’s ‘Ariodante’.

The Baroque orchestra Concerto d’Amsterdam led by violinist Stefano Rossi accompanies Mancini’s fine aria’s with an instrumental repertoire that comes from the same source: a concerto grosso by Corelli and two wonderous compositions by Charles Avison that are based on music by Domenico Scarlatti. 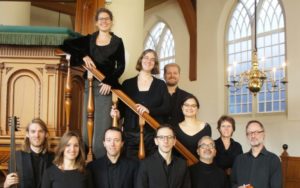 Cathedral Sounds
A day earlier, on Saturday 11 May 2019, Ensemble Hermes led by Jeroen Spitteler performed a concert with the title ‘Cathedral Sounds’.
The famous choir books of the Illustre Lieve Vrouwe Broederschap demonstrate that the St John’s Cathedral in ’s-Hertogenbosch was a breeding ground for new music for centuries. These exceptional books were produced between 1527 and 1584.
The mass ‘In te Domine speravi’ by the 16th century Dutch master Gheerkin de Hondt is one of the works in these books and forms an important part of the concert,
This work has never been porformed in its entirety before, so you can listen to a world première!

In addition to this 16th century music there are also more recent work from the St John’s Cathedral, music by Maurice Pirenne who was the organist and Rector Cantus of the cathedral for many years.
This concert brings together polyphony and music that it inspired.

Subsequently the broadcast can also be heard on demand via the link below.