Last 17th December I went with Govert Jan Bach to a performance of all 6 parts of the Weihnachtsoratorium by J.S. Bach in the lovely Sint-Gudulakerk in Lochem. By the Akademie für Alte Musik Berlin and the Nederlands Kamerkoor conducted by Peter Dijkstra. Lovely sound and performance! I’m studying the programme book and reading the texts. Next to me is someone reading the score and occasionally sings along a bit too loudly. 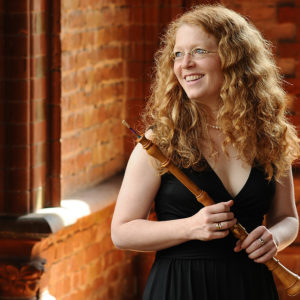 When I was asked 7 years ago to make a daily programme about Bach , it seemed like a nice idea, not suspecting that we would make more than 700 episodes. I was not interested in Bach, but decided to pay attention. As ‘first listener’ I’ve learned so much from Govert Jan.

From the start I repeatedly came across one special name on CD’s: Xenia Löffler, oboe. I often filled in the time with an oboe concerto. Of curse I had Marcel Ponseele among my CD’s, but kept coming across Xenia Löffler . Who was this oboeist with the remarkable name? During the second part of the Weihnachtsoratorium I opened the page with the names of the choir and orchestra. Pure pleasure. I held my breath, there she was: Xenia Löffler! I’d never realised that the mysterious Xenia of course played in the AKAMUS ! Rapidly look up and indeed, there she is! 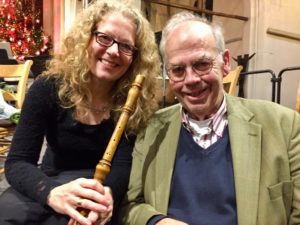 It’s the interval and the orchestra walks off. I worm my way through the people standing up and fortunately find Xenia Löffler getting her score ready. “Darf ich Sie begrüßen, Frau Löffler?’, I try an am greeted in a friendly way, we shake hands and I explain that for years I’ve been her name has been coming up on CD’s, been playing her concerts and now meet her in person. I’m a fan .
We have a lively conversation and she takes her score, looks in it and finds 2 little A4’s. A fax. She explains that in 2001 she had an audition with sir John Eliot Gardiner and had to play a piece from the WO. She didn’t have a score of one of the other pieces, called her teacher from the UK and he faxed the missing piece. She showed the date on the fax and the hand written large letters from her teacher: “Toi Toi Toi”. Since then they’ve always stayed in the WO score. And the audition was successful because she’s a regular oboe soloist on among other things the CD-series Bach Cantata Pilgrimage by The Monteverdi Choir & The English Baroque Soloists of John Eliot Gardiner.

I immediately thought we should make a portrait in Bach ad Infinitum. And it became a lengthy portrait, spread over several days. With on Monday works by Bach and on Tuesday works by other baroque composers. Met Xenia Löffler as ‘The Queen of the Oboe’. 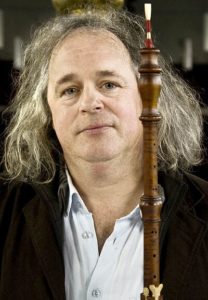 On Wednesday the episode is dedicated to the special baroque concert ‘O Fortuna Crudele’ which took place on Sunday 9th February in Amersfoort  and we have soprano  Henriette Feith (driving force behind concert organisation Music on Chairs) as guest in the studio. Henriette tells us all about this concert, and how she got Marcel Ponseele for this concert. And Marcel Ponseele, he of course is ‘The King of the Oboe’.

It promises to be  a royal oboe week in Bach ad Infinitum. I can only repeat, Bach remains a special adventure for me…

Click here to part 1 of the sloist portrait of Xenia Löffler on 20th January.