In Concertzender Live on Thursday 10th January we’re playing two recordings from the Early Music Festival 2018: the concert by Sollazzo Ensemble and the first performance by Ordo Virtutum.

Fiddle players
The two blind fiddle players Jehan Ferrandes and Jehan de Cordoval worked for decades at the court of Burgundy. They became famous because of the impact of their work on Dufay and Binchois.
The Sollazzo Ensemble plays and sings in this festival concert music about two generations of Burgundian fiddlers. 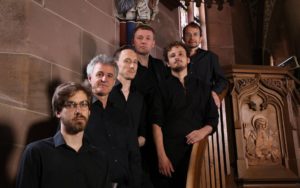 Burgundian cloister life
During the Early Music Festival 2018 the German ensemble Ordo Virtutum played twice and focussed on the opposing traditions in Bugundian cloister life
In the first concert the 12th century abbot Petrus Venerabilis is the leading figure, with service chants for the Feast of Transfiguration

Here is the playlist in the guide.