On Thursday 9th November at 20.00 we’re starting with the broadcasts of our concert recordings of the Early Music Festival 2017! 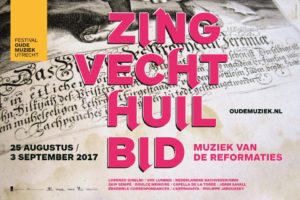 In Concertzender Live on 9th November we start with the second festival concert by artist in residence Lorenzo Ghielmi and his La Divina Armonia. This concert ‘Organisten-Musiken’ took place on 27th August and consisted of cantatas, concertos and motets by German composers from early Baroque.

Thereafter you can hear the concert by Tasto Solo led by Guillermo Pérez a day earlier in the Early Music Festival . It is a programme with music for the young Luther; music from the start of the 16th century by Dufay, Desprez, De la Rue and Agricola.

Here is the playlist for Concertzender Live on 9th November.