Concertzender Live on Thursday 13th December will be devoted once again to the Early Music festival 2018. This time we’ll be playing concerts by among others by Tasto Solo led by Guillermo Pérez and by Ordo Virtutum led by Stefan Morent. 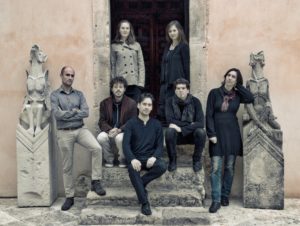 Déplorations
The Spanish ensemble Tasto Solo led by Guillermo Pérez plays the concert ‘De la Rue, Josquin, Brumel: Déplorations’.
Sad songs, grieving melodies, requiems: during the Middle Ages and Renaissance, when life and death were so close to one another, music about guilt and sadness was normal.
Tasto Solo looked for the loveliest tearjerkers from the era of French-Flemish masters such as Josquin Desprez and Alexander Agricola.

Cisterciënzers: een Officie voor Bernardus
During the Early Music Festival the German ensemble Ordo Virtutum (see photo) twice focussed on the two opposing traditions of the Burgundian monastery life.
During their second performance leader Stefan Morent showed the other side of Burgundian monastery life with songs from 12th century Cîteaux .
The unadorned lines of the cisterciënzer Gregorian sound in a service for Bernardus van Clairvaux.