On Monday 18th July on Nuove Musiche (18.00-19.00 ) we have a world premier! We’ll be playing a recently released CD containing just discovered violin sonatas by Vivaldi. Discoverer and performing musician is baroque violinist Javier Lupiáñez with his ensemble Scaramuccia. He describes it himself in Concertzender Today on 13th July.

It’s always a major and exciting moment when a new work is discovered by a major composer . This happened to baroque violinist Javier Lupiáñez, when he was looking for new material to perform in 2013 .

He visited the University Library in Dresden, where there was a collection by the German violinist Johann Georg Pisendel, contemporary of Bach.
In Dresden there are not only early works by Antonio Vivaldi but also many anonymous violin sonatas. Javier Lupiáñez found two which stood out. His violin teacher in Den Haag Enrico Gatti thought they could be by Vivaldi , and after a year’s research it can definitively be concluded that they were indeed composed by Vivaldi . 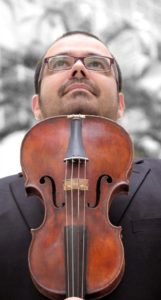 Javier Lupiáñez has recorded these sonatas together with another recently discovered work by Vivaldi in 2016 . And in Nuove Musiche on Monday 18th July we’re playing most of this just published CD ‘Antonio Lucio Vivaldi – Nuove Sonate’ by his ensemble Scaramuccia.

Javier Lupiáñez talks about these discoveries in Concertzender Today on Wednesday 13th July. He’ll also perform live some of his Vivaldi discoveries.

Here is the playlist of Nuove Musiche.