Op de site van Yannis Kyriakides  vertelt hij het volgende over zijn werk:
U was commissioned by Louise K. Wilson for her installation at Orfordness, Suffolk. Recorded by the Exmoor Singers of London, directed by James Jarvis. The recording is to be installed in one of the so-called ‘Pagodas’ where the early British nuclear bombs were tested. The title refers to U of Uranium, and the text used is from George Perec.

“ Space melts like sand running through one’s fingers. Time bears it away and leaves me only shapless shreds. ” 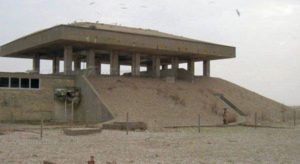 Het derde werk is van Kevin Volans. Op zijn site geeft hij een toelichting:
Cicada is my first genuinely minimalist piece. The title comes from a series of works by Jasper Johns, that are built up from hatch-marks and which are mirrored symmetrically down the middle of the paintings. I felt the pictures reflected the way in which the two piano parts mirror and interlock with each other exactly. But the real inspiration for the piece was the work of James Turrell. A friend took me to an opening of his in Kilkenny. In the evening we sat in large cubic light box in the grounds of the castle and over a period of an hour watched a square of sky overhead turn from the blue-gray of Irish clouds, though Yves Klein blue to slate black. I stayed overnight in my friend’s minimalist house in Killiney. The next morning I woke to a glittering square of sunlight reflected off the sea and I decided: no composition; don’t change anything except the tone.
The piece lasts approximately 23 minutes and was written for Double Edge (New York) with funds from the Mary Flagler Cary Charitable Trust. It is dedicated to Derek Hill.